Our mission is to improve the health and well-being of our Bay Area residents through integrated and compassionate patient care, education and research.

What is a stroke?

How do strokes affect people?

The effects of a stroke depend on a lot of things, including:

Some people who have a stroke have no lasting effects. Others lose important brain functions. For example, some people become partly paralyzed or unable to speak. Stroke is one of the leading causes of death and disability in the United States.

How can you tell if someone is having a stroke?

There is an easy way to remember the signs of a stroke. Just think of the word “FAST”. Each letter in the word stands for one of the things you should watch for:

The letters in the word “fast” help you remember the signs of stroke. If a person shows any of these signs, call 9-1-1 right away. 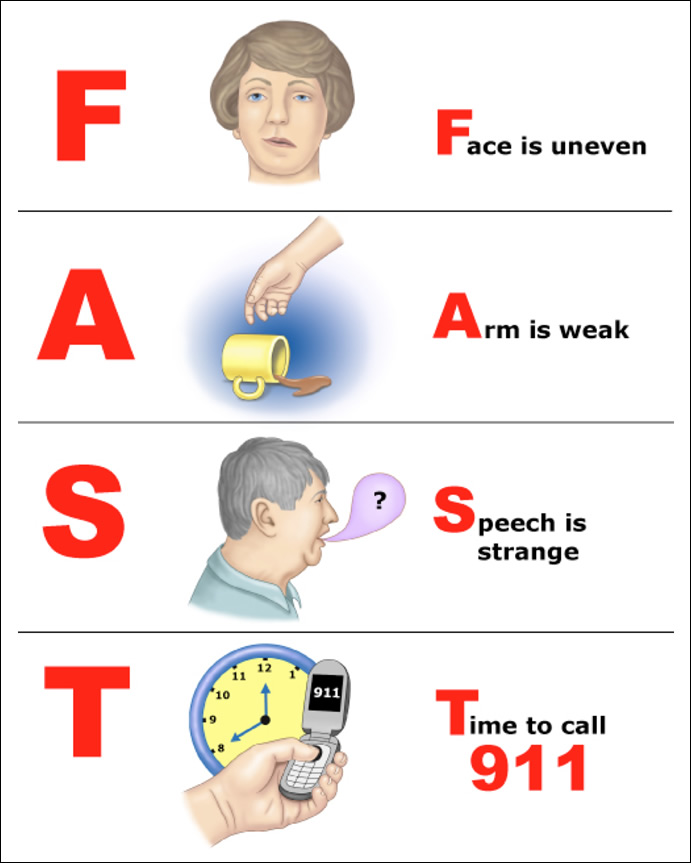 How are strokes treated?

The right treatment depends on what kind of stroke you are having. To figure this out, you need to get to the hospital quickly.

People whose strokes are caused by clogged arteries can:

People whose strokes are caused by bleeding can:

Can strokes be prevented?

Yes. You can reduce your chances of having a stroke by:

Another way to prevent strokes is to have surgery to reopen clogged arteries in the neck. This surgery is appropriate for only a small group of people.

A TIA is like a stroke, but it does not damage the brain. TIAs happen when an artery in the brain gets clogged and then reopens on its own. This can happen if a blood clot forms and then moves away or dissolves. TIA stands for “Transient Ischemic Attack.”

Even though TIAs do not cause lasting symptoms, they are serious. If you have a TIA, you are at high risk of having a stroke. It’s important that you see a doctor and take steps to prevent that from happening. Do not ignore the symptoms of a stroke even if they go away!